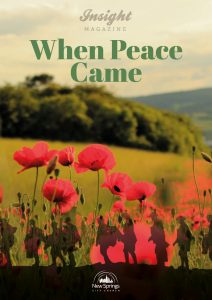 This year, 2018, is a special year of remembrance. It is the Centenary of the end of the First World War – The Great War as it came to be known. In fact, to be more precise, peace came at the eleventh hour of the eleventh day in the eleventh month – November 1918. Armistice Day as we call it was the day that the guns on the Western Front finally fell silent.

This hard-fought four year conflict claimed millions of lives and left untold numbers of soldiers and civilians seriously injured. The aftermath of the War changed the then world order beyond all recognition.

Yet in this fast moving modern 2018 world of ours, it’s sometimes easy to see the First World War as nothing but distant history. The jumpy black and white films, the unfamiliar clothes, the horses pulling wagons carrying heavy cannon-like guns, soldiers fighting up to their knees in mud in rat-infested trenches – all look like something from a time long forgotten.

And as this particular war slips inescapably beyond the fringes of living memory the world will inevitably have to work harder to make sure we never forget.

For those in that First World War generation who gave their lives and helped to shape the world as we know it today, the least we can do is honour, remember and give thanks for them. We have no doubt that others will commemorate the occasion admirably. Hopefully our ‘When Peace Came’ publication will at least add to that all-important act of commemoration.

More than this though, not only will it help us to remember, in this special edition of When Peace Came you will also find a number of features entitled I found Peace. These are true, inspiring stories of ordinary people who believe they have found peace in their own lives after facing and going through some of the most harrowing situations that a person can ever face in life. In fact there is one person we will introduce you to who really knows about this whole area of Peace. You could say He specialises in it.

If you have read our publication, we hope you have found it inspiring and if you want to get in touch with us further please get in touch. If you have not received a booklet please let us know.